So, I often come up with a great idea and when I actually try to implement it, the reality is a bit of a fail compared to how I pictured it in my mind.  That happened with one of my dad's Christmas presents this year.  I wanted to make some of the presents I gave this year and for my dad I decided to make him some BBQ towels.  He is a big fan of the Dallas Cowboys and the Oregon State Beavers so I thought it would be fun to make some towels to showcase those teams.  My first thought was to embroider the team emblems on some towels in coordinating colors.  However, when I actually started to try that I quickly realized it wasn't going to work out quite so well.  I ended up making him another version, based off of this tutorial for Grillin' Towels from Craft Whatever that I found on Pinterest.  (If you would like to follow me on Pinterest, you can find me here).  However, since this all happened the day before we were planning to exchange gifts I didn't have time to get all of the supplies together and get them made that day.  So he got an IOU on these.  I finally finished them a couple of days ago. 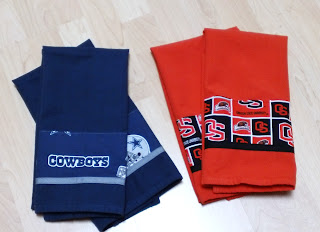 I think they turned out great and am pretty pround of myself, especially since I just started sewing again for the first time since 6th grade.  The tutorial was great, very easy to follow and understand.

I have to say, I'm getting hooked on sewing.  I'm most interested in quilting at the present moment and have some projects already in the works that I will post about as I finish them.  I also have some other smaller sewing projects in mind that I will include as well.  There is a ton of inspiration on the web.

I'm linking up to Tuesday Time Out at Reasons to Skip the Housework, Show Me What Ya Got Linky Party at Not JUST A Housewife, Fabric Tuesday at Quilt Story, TOO Cute Tuesday at Funky Polkadot Giraffe, Catch A Glimpse at A Glimpse Inside, Feature Yourself Friday at Fingerprints on the Fridge, Friday Link Party at Creation Corner, Wednesday's Wowzers at Oopsey Daisy, and Crafty Scrappy Happy me at Crafty Scrappy Happy.
Posted by Angie at 8:53 PM

Angie
I am a mom to two wonderful girls who inspire me everyday...to be a better mom and a better me. I hope this blog will be inspiration for them to be and do whatever their heart desires.